51 Fleetgate, often regarded as Barton’s oldest residential building, is one of the few buildings on the town with 14th Century material still intact.

Set in the heart of the west of the town, where maritime and commercial activity took place, 51 Fleetgate was probably the home of a wealthy merchant trading on the Humber.

The front section of the house is thought to date from 1325. In 1425 a large oak framed hall was added at the back. This had a thatched crown post roof, and was completely open from floor to roof.

Over the years the house saw many changes; in the 18th Century the front building was demolished and replaced with the current structure. In 1900 this front section was divided into 3 shops; in 1908 the Clipson family bought Number 51. 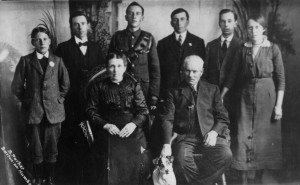 The house was bought by Glanford Borough Council after Fred Clipson, the last of the Clipson family, died in 1990. The house was taken on by the Brigg Heritage Preservation Trust who restructured the upstairs hall and restored the shell of the house. It was then bought back by Glanford Borough Council, then transferred to North Lincolnshire Council when the authorities were merged in 1996. In 1997-1998 further restoration was carried out by the Barton Regeneration Scheme. The building became offices for a time, and was also used as a base by the Civic Society. 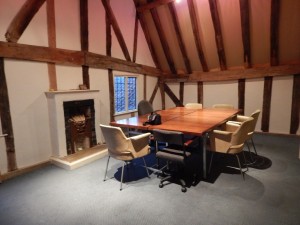 In 2009 No. 51 was leased to the CHAMP by the Council.  CHAMP in turn formed an agreement with the Civic Society that allowed the continuation of open days in the building.

Due to CHAMP concerns over the safety of the historic posters on the shop ceiling, the Civic Society moved out in 2015 to allow conservation work. 51 Fleetgate is now empty and has had a thorough spring clean. CHAMP and North Lincolnshire Council are working towards a further restoration phase, after which it is intended the house will reopen to the public.

If wishing to know more about the ongoing work, or if wishing to help fund this important project, please do feel free to get in touch.