The History of the House

Baysgarth’s full origins are unknown. It was possibly part of Bardney Abbey in the Middle Ages, but was privately owned by 1557. The current house mostly dates to 1730 – 1750, probably replacing an earlier timber framed structure.

The house is a grade II* listed building, built on an L-plan, with 2 storeys and an attic. It is built of red brick with a hipped pantiled roof. The building has an adjacent grade II listed stable building, believed to date from the early 19th Century, and an adjacent cottage believed to have been built for servants. This was still inhabited until the 1980s! Also attached to the property are grade II* listed gate piers in an 18th Century style, topped by a lion and a unicorn. The two lodges in the wall date from the 19th Century.

The Owners of the House

The first known owner of Baysgarth House is Thomas Glentham.

However, the best known owners to have lived here is the Nelthorpe family, who had the house between 1620 and 1792 (John Nelthorpe as a child,right). This family and their era are still remembered in the Georgian Room on the first floor. 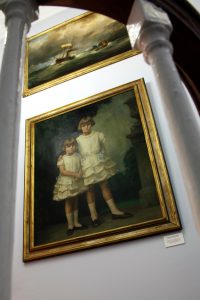 In 1889, Baysgarth was sold to Robert Wright Taylor, whose family grew up in it throughout the pre-WW1 period. The heir of the house, Lieut. George Robert Marmaduke Stanbury Taylor, was killed in a gas attack while serving with the Royal Field Artillery at Passchendaele. The house was therefore inherited by his sister Clare Ermyntrude Magdalen Wight Ramsden (née Taylor) who, being married and settled in Norfolk, gave the house to the Public in 1930. Clare Ermyntrude’s daughter, Diana, bequeathed a painting of herself and her sister to North Lincolnshire Council; this painting hangs in the stairwell at Baysgarth House (see left).

After the house was gifted to Barton Urban District Council it saw a range of uses. In 1940 an Air Raid Precaution (ARP) Officer was stationed in the house, and an ambulance service operated from the site. Following the war it became part of the Barton Grammar School, with the School Chair still present in the Parlour.

Council Offices were located in Baysgarth from 1960- 1997, with a museum opening in the building in 1981. This museum was taken on by CHAMP in 2004 after the council closed the building.

CHAMP’s Role in the Museum

12 years on, CHAMP has done a great deal to maintain and raise the standards of the displays in the Museum. The group hopes to further improve the site in the future, with a major redevelopment planned for the Stables and Cottage.